Shuko Suzuhara (鈴原 萩子 Suzuhara Shūko?) is Misaki's mother and Shoko's elder sister. She is 31 years old. In the anime, it is explained that Shuko left Misaki at the age of five to be taken care of by her grandparents under the guise of work, when in reality she was going to Tokyo to search for a cure her neurological disease. This disease inhibits nerve signals from reaching to or from her legs. Ichiro Mihara was a doctor attempting to work with her to find a cure when the two started Angelic Layer as a way to do research and raise funds. Shuko, or "Shu" as she is called when playing Angelic Layer, is the undisputed champion with her angel Athena, having won the past three national championships. Over the past seven years, she has avoided meeting Misaki, as she is afraid of what Misaki would think of her. In the manga, Shuko has no disease, but is extremely shy about socializing with those she loves. She works for the company behind Angelic Layer.

She has brown hair like her daughter. Their eyes are also similar. 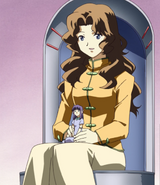 Retrieved from "https://angeliclayer.fandom.com/wiki/Shuko_Suzuhara?oldid=5305"
Community content is available under CC-BY-SA unless otherwise noted.