How Do You Do? My Very Own Angel!

She is a 12-year-old girl who has just moved to Tokyo to live with her aunt. She had been living with her grandparents in Wakayama while she went to elementary school, but saved her money so she could afford to go to middle school in Tokyo. She worries about the fact that she is small and unathletic, and is sometimes mistaken for an elementary school student. She sees Angelic Layer as a way to prove that there is nothing wrong with being small. She started playing Angelic Layer after seeing the white angel Athena on a video screen outside of Tokyo Station (she was unaware that she was seeing her own mother's angel). Her angel is Hikaru, and she is known as the "Miracle Rookie". She is nicknamed Misakichi (みさきち) by her friend Tamayo. In volume 7 of the manga Chobits, she is seen with Minoru and two other visitors at the hospital visiting Kaede.

She is a timid, sweet-tempered, and kind girl but in the manga she is more overreactive and easily excited. She does not like fighting with others.

Misaki accidentally booked a fighting layer instead of a practice layer for her first time playing Angelic Layer with Hikaru.

After having a short practice session with Mihara Ohjiro, Misaki was approached by a deus and her angel, Queen. The deus cheated by using electric whips, which are forbidden in Angelic Layer.

Misaki and Hikaru's first official fight in the Kanto Tournament.

Hikaru had to battle a heavy weight type of angel and Misaki had lost her faith in fighting with Hikaru.

Misaki and Hikaru battled Hatoko and her angel, the Light Speed Suzuka. She eventually lost when Hikaru received a blow from Suzuka's special technique, The Rolling Thunder.

Still afraid of fighting after her loss to Hatoko, Misaki and Hikaru had to fight Tsubaki for her last chance in Kanto Tournament.

First time fighting against a boy, Misaki was not sure if Hikaru will ever be able to win.

Misaki lost her confidence when fighting the idol Seto Ringo and her angel Ranga with her lethal move, The Dance Of Death.

Misaki faced the Fujisaki sisters who cheated by putting a transmitter on Hikaru to disrupt the connection between Misaki and Hikaru.

Misaki was distracted when she found out that her mom was going to be in the tournament. And when she had finally got her head in the game, she had to face the fast angel Blanche and her Hyper Mode.

The Kanto tournament final. Misaki fought against the ice machine Jonouchi Sai who pointed her weakness before. And while fighting Sai and Shirahime, Misaki struggled to find Hikaru's weakness.

Misaki and Hikaru have to face an opponent that finds being big and tall a disadvantage. Misaki fights to prove that anyone can play Angelic Layer regardless of height.

With Hatoko having fallen ill, Ohjiro Mihara steps in as Misaki's Second against the company's latest model of Angels in a demonstration battle.

The final stepping stone before Athena, Misaki and Hikaru face off against Wizard and his signature technique, Magic Guard.

In the final battle of mother vs daughter, several years' worth of communication takes place through Athena and Hikaru. 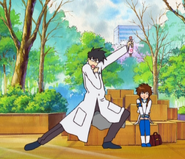 Retrieved from "https://angeliclayer.fandom.com/wiki/Misaki_Suzuhara?oldid=5348"
Community content is available under CC-BY-SA unless otherwise noted.