Nicknamed "The White Angel," Blanche is a powerful angel dressed as a nurse who is so fast that she has only been touched by four other angels. When in a tough fight, Blanche will use a technique called "Hypermode", which is a result of a glitch present in the first angels. Blanche is a contestant in the Kantō regional games. Her name can also be written Branche with the romaji "r" sounding like an "l". "Blanche" is French for white.

Blanche is a first-generation angel. She has short blonde hair that curls at the bottom and her attire is based on a nurse's outfit. She has a white nurse's cap and a white thigh length dress with sleves that stop where her white gloves start. Her shoes are long boots that stop at her thighs and consist of two parts. Her eyes go from a brown-red to yellow when she is in "Hypermode". Her skin is pale. and she is very pretty.

Blanche fights like most angels, using punches and kicks with lightning speed and presicion. In "Hypermode" she can possibly break an angel, using amazing strength and eeriely quick speed. Also her body glows yellow when she is in this state. 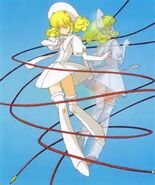 Retrieved from "https://angeliclayer.fandom.com/wiki/Blanche?oldid=5095"
Community content is available under CC-BY-SA unless otherwise noted.